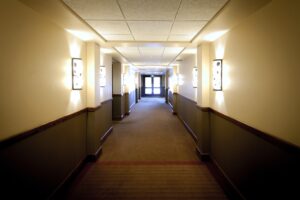 In late 2016, the staff at Youth, Rights & Justice noticed that a number of our clients in foster care were being housed in hotel rooms for long periods of time — weeks or even months — rather than being cared for in a family foster home. Most of the children impacted by these lengthy hotel stays were teens, however, some were infants. As a result, children were not getting the services that they needed and many weren’t attending school.

YRJ attorneys partnered with the Oregon Law Center and CASA for Children to bring a class-action lawsuit against the Department of Human Services (DHS) and end this harmful practice. The lawsuit was ultimately settled in 2018, with DHS committing to curtail placing children in hotel rooms in lieu of family foster homes.  As a result of DHS noncompliance with the settlement, YRJ went back to federal court in 2019, and DHS was required to comply with new standards. Since that time, the number of children placed in hotels and the length of those stays has been reduced. In January of 2021, DHS announced that it had “Decreased the use of temporary lodging by 66% percent in the last twelve months. (Temporary lodging is the temporary placement of a child in a hotel room because there is not an appropriate placement immediately available.)”

Maggie Carlson, YRJ attorney and one of the lead attorneys now handling this case, spoke about the progress made, “Since the agency initially began placing children and young adults in hotels, it has been universally acknowledged that the practice doesn’t meet the needs of our state’s most vulnerable wards. YRJ is pleased to have been a part of the solution that led to the decrease in placing Oregon’s children and young adults in placements that don’t allow them to thrive.”

To read more about the lawsuit and subsequent settlement, check out the article below, originally published in 2018 in YRJ’s Juvenile Law Reader.

Bringing an end to a lawsuit started in 2016, the State of Oregon committed in a settlement on file in federal court on February 27, 2018, to “incrementally” reducing the number of foster children placed in hotel rooms.

In the case, filed in United States District Court on September 27, 2016, lawyers representing children in Oregon foster care asked a judge to put an end to the practice of housing vulnerable children in a series of hotels and offices at night and providing no home for them during the day.

The plaintiffs were represented by a team of attorneys from the Oregon Law Center, Youth Rights & Justice, and Miller Nash Graham & Dunn.

The plaintiffs alleged that:

Tonight, some of the most vulnerable children in the state of Oregon will sleep on temporary cots in state offices; in hotel rooms; in hospitals, despite being cleared for discharge; or in juvenile detention facilities, despite the absence of any criminal charge against them. Some may have spent the day sitting in a DHS office, missing school. These are children over whom the state has custody. Some are as young as two years old; many are children with disabilities; all have experienced trauma. The state has removed these children from their homes despite not having any home to move them to. As experts in the field agree, the state’s practice of rendering foster children functionally homeless is unconscionable. It is also unlawful.

Additionally, the complaint noted that children forced to stay in hotels or state offices are likely to miss school, adding to the uncertainty and instability of their lives.

At the time the lawsuit was filed, Angela Sherbo, Supervising Attorney at Youth, Rights & Justice, who has represented children and parents in the foster care system in Oregon and elsewhere for nearly 40 years, said that the legal team filed the complaint after approaching DHS directly to cease the practice.

“Children in the custody of the DHS are there because they have already suffered harm and because they have already experienced trauma. It’s the state’s responsibility to protect them—not to inflict further harm—and it is our responsibility, as Oregonians, to make sure the state ends these practices immediately,” said Sherbo, one of the lawyers representing the children.

“We know that DHS has many dedicated, skilled caseworkers doing their best to serve kids in trying circumstances,” said Sherbo, “but documents show that DHS has been either unwilling or unable to remedy the longstanding problem. That is why we are taking immediate action, and seeking a court order to force DHS to find appropriate placements for kids in its custody in the most integrated, family-like environment possible.”

Two months later, the suit was placed on hold as the sides participated in settlement talks. An interim agreement was reached in November 2016 saying that effective December 31, DHS would cease placing children overnight in DHS offices unless there is no “available and safe hotel” within 30 miles or 30 minutes of the office. The agreement also said that foster children would be placed in hotels only in “emergency circumstances” where no “safe or appropriate” licensed residential placement or certified foster home is available. Settlement talks continued, with one interruption during which more pleadings were filed, and more public attention was directed at the practice.

Secretary of State Audit Addresses the Placement of Children in Hotels

In January, 2018 the Secretary of State issued an audit of the DHS foster care system. Among its findings were several about hoteling, including the number of children affected, the lengths and number of their stays in hotels and the cost to the state.

“From September 2016 to July 2017, DHS placed 189 individual children in hotels at least 284 times. Several of these instances involved the same child being placed in a hotel multiple times. One child was placed in a hotel nine separate times in a 14-month period. Several other children had three or four separate hotel stays. The average length of stay was approximately seven days, but 26 children were placed in hotels longer than 20 days. One ten-year-old child stayed 81 days. For each stay, two adults, including at least one DHS caseworker, is required to be with the child around the clock.

“We estimate that one hotel room, overtime, meals and one activity for one child and two caseworkers is about $1,350 per day. We also estimate total hoteling costs from September 2016 to July 2017 are over $2.5 million.”

The full audit report can be found online.

Condition of the Settlement Agreement

The lawsuit was settled on Tuesday, February 27, 2018. Among the provisions of the settlement are:

The Oregonian’s article on the settlement can be found here.