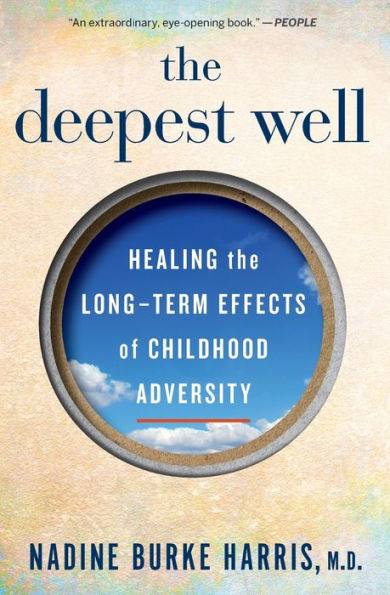 “Every day I witnessed my tiny patients dealing with overwhelming trauma and stress; as a human being, I was brought to my knees by it. As a scientist and a doctor, I got up off those knees and began asking questions.” – Dr. Burke Harris

The Deepest Well focuses on the impact that adverse childhood experiences (ACEs) can have on a person’s growth and development, physical health, and long-term well-being. The term ACEs comes from the Adverse Childhood Experiences (ACE) Study, first conducted from 1995 to 1997. The purpose of the ACE study was to determine why many common diseases were not randomly distributed in the population—in other words, why risk factors for chronic illnesses tended to cluster in particular people. The primary finding of the ACE Study is that exposure to childhood adversity (defined by the ACE study as abuse, neglect, and household dysfunction) is a stand-alone risk factor for a host of chronic illnesses and early death. Moreover, the relationship between the number of ACEs and an individual’s risk of developing chronic illness was shown to be exponential.

The general causal chain for ACE exposure is as follows: adverse childhood experiences lead to disrupted neurodevelopment, which leads to social, emotional, and cognitive impairment. Such impairment leads to the adoption of health-risk behavior, which in turn leads to disease, disability, and social problems, which then leads to early death.

The Deepest Well recounts how the ACE Study influenced Dr. Burke Harris’s medical practice and ultimately drove her to advocate for universal ACE screening and multi-disciplinary teams as best practices in pediatric healthcare. Using plain language, The Deepest Well explains how toxic stress impacts the body down to a cellular level by hijacking the body’s fight-or-flight response. The book outlines how such experiences can shape the development of brain and body, and how toxic stress can even cause epigenetic changes that can be passed down through generations.

Dr. Burke Harris’s discussion of the ACE study is punctuated by stories from her work at a pediatric clinic in a low-income community of color. In that clinic, she found it striking that many of her young patients who suffered from conditions like asthma, obesity, and ADHD shared one commonality—they had all experienced some type of traumatic event or significant stressor in their young lives. For some of her patients, she was able to directly trace the condition’s onset to a particular traumatic event, such as an incident of sexual abuse or exposure to domestic violence. Using the ACE study as a jumping off point, Dr. Burke Harris adopted practices in her clinic that included screening every child for ACEs and bringing therapists and social workers onto healthcare teams. She also worked to develop opportunities for parents and children to learn about healthy lifestyles and foster resilience.

The Deepest Well pushes back at those who fear that universal ACE screening will lead to the stigmatization of already-marginalized people. For Dr. Burke Harris, identifying the problem is the first step toward developing solutions, and those solutions have the potential to improve many lives and reduce a great deal of suffering. Moreover, Dr. Burke Harris’s own life demonstrates that exposure to ACEs doesn’t preclude a person from living a productive, satisfying life. Instead, Dr. Burke Harris views awareness of one’s ACE score as a path to empowerment. For her, screening for ACEs allows educators, service providers, and caregivers to focus their efforts on counteracting the negative consequences of toxic stress, giving children a fighting chance at overcoming the odds.

Of course, positive outcomes very much depend on the availability of resources, including mental health care, which is not a given in many places. Moreover, some may prefer to remain ignorant of their level of risk, given that they are unable to change what happened in childhood. The Deepest Well doesn’t purport to answer all of the policy questions that it raises; it’s the start of a conversation, not the end of one. The book’s goal is to clearly articulate what the evidence shows and which efforts have been productive thus far. The question that it poses is: what are we, as a society and as individuals, going to do about it?

For juvenile law practitioners, the Deepest Well raises the stakes of our work. We have all witnessed the consequences of toxic stress for our clients, manifesting as ADHD and developmental delays in children, as high-risk behavior in teens, and as substance abuse and mental illness in adults. The Deepest Well paints a devastating picture of the ways in which ACEs can derail a life, sometimes even before a child has learned to speak. Thankfully, professionals in legal, medical, and educational systems are already working to confront the challenge presented by The Deepest Well. Given the pervasiveness of toxic stress and its enormous consequences for our clients, Dr. Burke Harris’s story deserves the thoughtful attention of the juvenile law community.